Goats are excellent eaters, and can  help with removal of invasive growth in an eco-friendly way. Good job, goats, and good job, Poncey-Highland Community Garden!

The Freedom Park Conservancy is looking to hire our very first Executive Director. This is a very exciting time to be involved with FPC, and we can’t wait see what we can achieve with a new leader at the helm.

For the neighborhoods and residence east of downtown Atlanta, and for my family in particular, Freedom Park is the treasured legacy of civic activism.  In 1992, my wife Laura and I purchased a craftsman bungalow a few blocks from a ragged strip of land aimlessly rolling down hill toward it’s dead end at Moreland Ave. With an eye on preparing the city for the 1996 Olympics, that overgrown grassy spit of land was soon transformed into the eastern terminus of Freedom Parkway and part of the two hundred acre Freedom Park. It traces the path of one section of the defeated Stone Mountain Freeway and Presidential Parkway; from the Martin Luther King Jr. National Historic Site, past the Carter Center, to a narrow spur of land near Jackson Hill Baptist church in Candler Park and Druid Hills.

As the years flowed by, we raised two ‘in-town’ girls and restored the bungalow. At every opportunity we strolled, jogged, walked, and explored Freedom Park.  The jogging stroller turned into a tricycle, a tag-along and then bicycles. The girls learned to ride bikes, fly kites and catch raindrops on their tongue in the meadow.  This unique linear park took us to school at Mary Lin and to the MLK Center on quiet curving paths. It showed us unique art installations, and connected us to six other neighborhoods. It’s hard now to imagine that the Carter Center sits at the nexus of what was to have been a monstrous cloverleaf interstate junction!

Recently, there as been a renewed interest in the incredible story of how CAUTION and citizens from these Eastside neighborhoods  rallied to do what was considered impossible — stop Georgia DOT, big business and special interests from bulldozing even more homes and grabbing green space to build an interstate connector between Stone Mountain and I-75/85.

Last February a pop-up exhibit entitled “Protest, Pickets & Parkways” displayed posters, photographs and newspaper articles chronicling the road fight. This event was located at an Inman Park gallery overlooking both Freedom Park and the Beltline, providing a look at both the past and the future. Last August, a 25 year anniversary gathering was held at Dellwood Park, part of the Olmstead Linear Parks on Ponce de Leon Ave, to celebrate the legal settlement which ended the 10 year battle to “Stop The Road”.

On that sunny afternoon in Dellwood Park, I had the honor of addressing those gathered on behalf of the current Freedom Park Conservancy Board of Directors. My youngest daughter, now a senior at Agnes Scott, and Laura were volunteers that day. On behalf of the conservancy, and my family, I expressed the gratitude of all those who now live in the vibrant neighborhoods that have flourished over the intervening years. We also made a commitment to build on the gift they bequeathed to all of Atlanta.

With the metropolitan population expected to double over the next twenty years, it is clear that Freedom Park will be greatly impacted by in-town development.  In 2007 the City Council passed a resolution naming Freedom Park as Atlanta’s Arts Park. To realize its full potential, Freedom Park cannot go into the next 25 years without a vision for its future. As an integral and vital component of a transforming urban area, a master plan for the park is needed, and a professionally run conservancy to oversee it.

This year, the Freedom Park Conservancy (FPC) has begun delivering on that commitment. The FPC has received two significant grants; one for design services from Perkins + Will, and a private grant to hire an executive director. Utilizing pro bono hours donated by Brodbeck Board & Brass, the FPC is finalizing a strategic plan that will create a board capable of managing a significant annual budget, embarking on a capital campaign, and creating an RFP to bring a new master plan to market.

We all envision a park that is an asset to the city, a safe and beautiful space that is an inspiration for the next generation of ‘rain catchers’. We look forward to the challenge and to working closely with the neighborhoods during the master planning process anticipated to kick off in 2018.

Now is a great time to join us – please consider donating to the FPC by clicking the yellow donate button on the left of this page.

Help us give the park a little love this weekend by helping out with our first annual Earth Day cleanup event!  Volunteers should wear sturdy, close-toes shoes and work gloves (extra gloves will be available). Bring a water bottle, bug spray, and sunscreen. This event is free and all ages are welcome, but all children must be accompanied by an adult.

Come find us at the white tent with Freedom Park Banners – we will be located just below the Freedom Farmers Market on the eastern end of the parking area.

See you this Saturday!

Want to win a gift card to @javavino? ☕️☀️ We’re having a #freedomparkpups contest from now through Sunday, April 2nd! Post a photo to Instagram of your dog walking, napping, playing frisbee, skateboarding, hanging out in a baby backpack, or whatever your dog likes to do and we’ll select a lucky winner at random. The two rules are that the photo of your dog must be in Freedom Park and you must tag us @freedompark_atl and use the hashtag #freedomparkpups to enter the contest! Contest is also limited to US residents only. We’ll be in the park this Saturday (4/1) with dog treats and water, so come say hey! And thank you to @elliewren_thebrit for being our puppy model! 🐶. 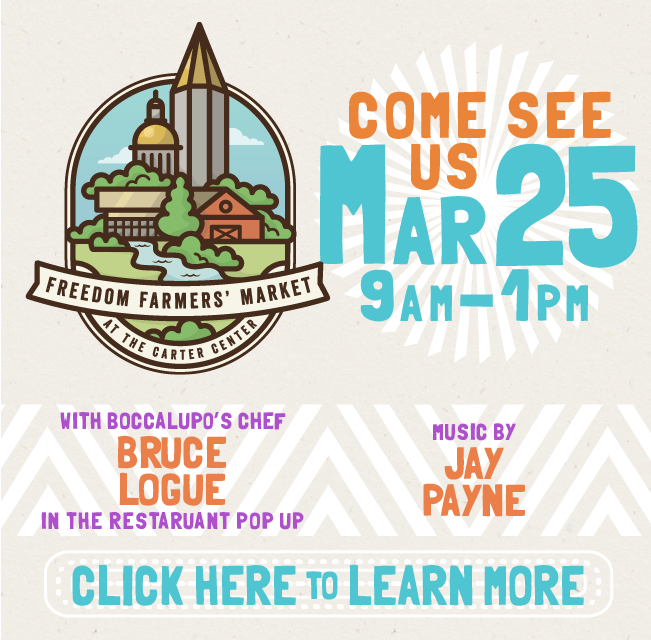 Stop by for produce, flowers, goodies, and your morning coffee. We hear there will even be a special guest…

Check out old footage of the fight to stop the highway and save the neighborhoods, leading to the modern day Freedom Parkway and Park.

Look for footage of a young Bill Campbell, City Councilman in 1988! in the video below.

During Martin Luther King Jr. Day, volunteers are needed to help with landscaping projects and general park cleaning. Volunteers will also be painting over graffiti under bridges at Randolph St NE, Highland Ave along the Freedom Park Trail.

Please be prepared to walk throughout the park and to cross a street or two to get to the various portions of the park.

At the Freedom Park Conservancy Annual meeting held the Second Tuesday of November 2013, the new slate of Officers were elected for 2014. New Officers and Committee Chairs for 2014:

Congratulations to all! 2014 looks to be a big year for Freedom Park as the Board begins in earnest the effort to update the park master plan which is long overdue for a refresh. The board also continues its charge to protect the integrity of the park boundary and the lease between GDOT and the City, which is unique to Freedom Park, in the City of Atlanta. In 2013 the FPC Board successfully worked with the Parks Department and Atlanta Public Schools to establish a City resolution for the donation, by APS, of the forthcoming parking lot in Freedom Park adjacent to Mary Lin Elementary School. This resolution is a necessary recognition of the process by which the parking lot was established and most importantly it protects the integrity of the 99 year lease for Freedom Park. Not familiar with the unique history of this great park? Check out this mini documentary.